When Death’s dry whisper hollered for my wife
And almost sixty years of love was gone,
I was alone, with none to share my life.
The house now rang with silent cinnamon.

My soul was stalled, until that day my phone
Was jarred awake with tidings in your voice.
The news was sad, but now the seeds were sown
For us to find our comfort, and rejoice
As further calls in your pink baritone
Helped lift our spirits beyond mere Hobson’s choice.

Those urgent calls became more frequent still,
As we discovered needs within ourselves
Were filled without our spouses there; until
We passed the point where lists of common selves
Became a “we” instead—our hearts were filled.

We always ended calls with vows to stay
In touch, although we live across the street
From one another, saw the same old friends,
And met at church.  This got us through the days
Until that time, I wanted us to meet—
And found that you did not want to attend.

I must have seen a deeper meaning here.
For me, the words “To Keep in Touch,” should mean
Somatic contact, not just social cheer.
This lack of union, I should have foreseen,
Because the phone was all we had, my dear,

We could have met (and touched), but you were pleased
To stay as friends that were too occupied
With chasing fun to hug and kiss or squeeze
Our hands together—Oh, the times I’ve tried!

You said you saw some anger in my voice,
But never knew frustration like I do.
Relationships should meet the needs, by choice
Or chance, of both, not just the likes of you.

I make these waves because I wanted me,
With you, in person; not a hidden man
On your back-closet shelf, to wait and see
If schedules left me space within your plans.

Your weekly game of Bridge must have its fourth
And shuffleboard has tourneys to defend.
I need to find out where I stand; my worth
Within your scheme.  Where does my name now spend?
It’s time on lists of yours, as we go forth
To days ahead—this man you once called friend?

You say you love me, yet, the way you say
It, “love” now has the sound of those other
Four-lettered words with wicked tone, and may
Be used to hurt so deep, it can smother.

Although you claim the gossip soon will start,
I wanted more than calls and talk, and those
Now end with slammed receivers, threats that smart,
And silent gaps which stretch until they close.

You want to sit with friends on Sunday morn,
While this sole friend’s alone in back—a row
So far removed from front, this poor forlorn
Old fool just might as well not be with you.

A friend in need can also need a friend
Who makes the time for him, alone. The two
Of us must part our ways and find our end.
And so, my phone no longer chimes for you. 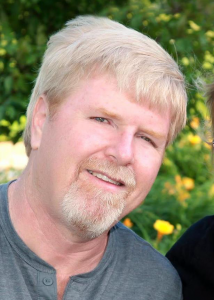 Steve Cooke has enjoyed writing for over thirty years, with dozens of published works.  He has lived in Kearney Nebraska for over 5 years with his wife and two of his three kids.  Steve currently manages the Kearney Goodwill and is the creative writing instructor at Central Community College and is currently on the board at the Kearney Children’s Museum.  Steve volunteers with Junior Achievement and Crane River Theater.

Previous StoryPodcast The Pub 19: Video Games and Story (or I’m Ridin’ around on a Giant Bumblebee!)
Next StoryProcess Piece – Silas Plum