The Mother by Jay Frankston

She takes the seeds from her womb, scatters

them to the wind and sings to them, the Mother.

And the wind lifts them high above fields, above

fears, takes them round and round then lets them

fall. And flowers and trees and children grow from

the earth. And the sun shines upon them and

and waits for them

Around the corner the panhandler stands with

his hand stretched out: “Spare any change,

Mister?” There’s Vietnam in his head, and the

blades of the helicopter keep roaring in his ears.

And the children duck at unexpected times as if

they could hear them too. But it’s another war they

they know, the children, they know that it will take

them and bleed them and drop them from the sky.

And the Mother will scoop them up and return

them to her womb and refuse to give birth again. 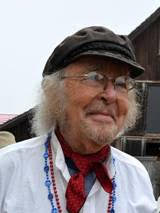 Jay Frankston was raised in Paris, France, lives in Mendocino,
California and is the author of several books and of a true tale
entitled “A Chrismas Story” which was published in New York,
condensed in Reader’s Digest, translated into 15 languages, and

called a Christmas classic by many reviewers.