Herbert feared the intense pounding in his heart would explode from his emaciated chest onto the frozen field of his escape. The buckets of snow pouring from the black heavens were aiding his cause by covering his foot prints. This was the night he had waited for, a moonless sky, with weather projected to become profoundly worse as December rolled into the new year.

He knew all too well that when it was discovered he had abandoned his guard post he would be pursued by his fellow soldiers, the same soldiers he had shared a meal with just hours earlier, under strict orders to kill him. He needed to find someone kind and brave enough to offer him shelter from this war he was being forced to fight. All he wanted was to be back in Hamburg with his family, teaching physics at University.

He was a pacifist, not a regimented soldier of war. A father to nine-year-old Ingrid, five-year-old Wolf, and husband to Gerda. In his frequent dreams, the children appeared just as they had before the army separated them two years ago. And his beloved Gerda, always with that wonderful smile, beautiful and happy, just like on their wedding day. How was she coping with her husband’s absence, without his common sense and wry humor? Were they safe? Did they dream of him as well?

There were lights in the distance that Herbert imagined as symbolic beacons of freedom.

He found himself in mid-flight, crash-landing onto the half-frozen river. His right boot broke through the ice as he flailed for something to grab on to. The icy water felt hotter on his submerged leg than the summer sun in Hamburg. Soon his entire body would experience the same sensation as his weight became too much for the sheet of ice to bear. He started to sink beneath the water’s surface.

When Herbert awoke, he was in a room lit by candlelight. He was shivering, despite being under a pile of blankets. The room was unfamiliar to him, possibly an attic or refurbished barn. He realized he was not alone.

A young girl, near the age of his own daughter, was seated at a table on the far side of the room, reading by the dulled light of a flickering candle. He could barely make out the title of the book she was so entranced in, Grimm’s Fairy Tales, the same book he had given young Ingrid three Christmas mornings past. Herbert believed he had somehow found his way back to his family.

Startled by the man’s voice, the young girl ran from the room, dropping the book of fairy tales onto the wooden floor. “Papa, Papa, Come quick. The soldier man is awake,” she said, in a dialect Herbert barely understood.

For the first time in two years, luck was on Herbert’s side. He had been rescued by a member of the French underground and brought to the man’s farmhouse. Sensing the German soldier’s plight, the man’s family agreed to provide shelter until it was safe for Herbert to make his way back to Hamburg.

A young girl was skipping through the meadow, picking wildflowers and chasing butterflies. The sky was navy blue and the chill of winter still lingered in the early spring air.

She followed the sounds of croaking toads to the river near her family’s farmhouse. She spotted a toad perched on a chunk of ice and crept closer to get a better look. The toad, well aware it was being watched, hopped off the ice and plopped into the river.

The girl ran across the narrow wooden bridge to the other side, hoping to catch a glimpse of the elusive toad. What she found instead was the submerged body of German soldier, Herbert Mueller, at rest on the river’s bed, his dreams frozen in time. 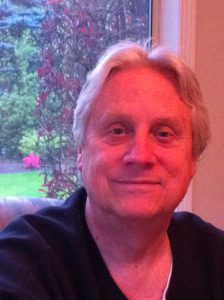 Fred Vogel has been published in Literally Stories, Subtle Fiction, Straylight, Clever and elsewhere. He lives in Oregon.