“That’s one peppermint mocha and a large iced coffee,” he said as he reached into the cold and handed them their drinks. She carefully placed the drinks into the cupholders and slid her fingers down the straw to remove the wrapping as he sped away from the window. “Where are we off to tonight?” he asked with a grin. She looked out the window as if she could see the cities through all the cars and the trees. “How about Los Altos? I bet we’ll see some good ones there.”

He loved to drive. Not for reasons that most people have. It wasn’t the control that he desired. He mostly drove just to think and other times to not think at all. And so he drove her swiftly up the rolling hills of Los Altos searching for the brightest lights. When they reached the middle of the incline, they turned right onto one of the side streets, but there were no lights in sight. For a moment he thought to himself that without the dark streets, the other lights wouldn’t appear as bright. He could see she was disappointed, and so he drove with determination to find something more.

Finally appeared homes worthy of hitting the brakes for. Red-striped candy cane lights lined the walkways, blue and silver scintillating icicles sat along the edge of the roofs, and some familiar characters of imposing size stood in the lawns ready to usher guests inside. Christmas trees glowed from behind sheer curtains like tunneling candles, and the tiny rainbow lights strung high in the giant trees looked like constellations in the night sky. “The key is to find neighborhoods that are somewhere in between,” he said as he gazed out the window. “The rich areas don’t care about decorating and the poor can’t afford to. It has to be just the right amount of hope.” She looked over and smiled as they drove on.

They peered left and right and sipped on their drinks, sneaking glances at one another in between. He reached for her hand and held onto it tight pulling her close. “It’s nice when people decorate just the inside of the house. Not everyone gets to see, only the few you choose to let in.” she said. He smiled to himself knowing he was invited in. “What’s that smile for?” she asked with a sweet smirk. He held on a bit tighter.

They made a sharp right and accelerated onto a street near the base of the hill. “Look!” she exclaimed. To their left stood a charming house dressed in rainbow lights with every inch of the lawn covered in inflatable snowmen, Charlie Brown characters, sparkling reindeer, and projected lights. With the back of his head facing the house, he looked at her smile, her lips slightly parted and saw the reflection of the house in her light brown eyes. It was worth the drive.

He turned to the house and then back at her again. “I’m going to get out and take a picture,” she said opening the passenger door. As soon as she stepped in front of the lawn all the lights went out. She turned around and locked eyes with him as they began to laugh together uncontrollably. It was 10 PM sharp, and most of the homes set timers for their displays.

She sat down and closed the door behind her. “We just missed it” he said. “We’re good at that.” 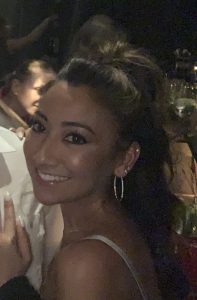 Monica Omid-Zohoor graduated from UCLA with a degree in applied mathematics and currently works in finance at Apple. However, she has always had a passion for art, fashion, and classic literature. Her favorite novel is The
Beautiful and Damned by F. Scott Fitzgerald.