The corned beef was on its way. After so many years, Jennifer knows what I want, and I’ve been on a serious corned-beef kick. The Clayton Diner’s known far and wide for its sandwiches, especially the kosher ones. The coleslaw’s world-class, too, and if lemon meringue could be pickled, it wouldn’t taste lighter than their gherkins.

Anyway, I was sipping coffee and reading Isaiah Berlin—time to give his essays another chance—when these two women threw themselves into the booth behind me. I didn’t have to turn around to know they were fat, what with the shaking and rattling they got going just adjusting themselves, and of course, right away a baby starts whining—might as well shove a pencil in my ear.

Live and let live, I always say. I got back to Berlin, despite all the rustling and thumping behind and underneath me—all the booths are bolted to a single frame in these places—and the baby yammering, bashing its foot against the high chair it sounded like.

“Did, too. You don’t listen,” said the other one as Jennifer slid my food under my nose, the pile of corned beef oozing brown mustard from under the top slice of rye.

“It’s a cookbook,” said the mother, voice kind of velvety, the kid finally going silent. The older one humphed and pushed herself hard against the back of her seat, jostling me forward a bit, but at least she shut up a second.

It’s a busy world. I spread Berlin upside-down to keep my place and lifted half the sandwich to my mouth. The first bite is always the best, and I sure enjoyed the hell out of that one. I bit off half the pickle and took a forkful of coleslaw, the whole mess so glorious I just closed my eyes and concentrated.

I’d just picked up the other half of the sandwich when the older fat woman knocked a knuckle on the table, said, “Let’s order already. I’m famished.”

“’Famished?’ Who says ‘famished’ anymore?” said her daughter—they had to be related—my table groaning like we were aboard ship. “We could’ve ate already. Lookit. One, two, three. That’s all this casserole takes.”

“So fix it tonight,” said Grandmother. “Shut up that Jimmy for once. Keep him around. The other one’ll stay gone. Admit it.”

Before Grandmother could further her case for household peace, their waitress arrived, and took their massive order. Once they’d all three left for “tinky time,” I finished my coffee, wiped a circle clear on the fogged up window and just looked around out there as I like to do—ice-puddled lot, road salt whitening every quarter panel in sight, and taillights blinking down the hill at the interstate on ramp.

After a few minutes, I twisted around to find Jennifer and saw that “tinky time” had ended, the women trundling between the row of booths and the counter, the guys in the stools sliding forward as the women squeezed past, the baby nestled against Mother’s breast, all three looking exactly as I’d imagined as they reinstalled themselves in their booth, their complicated maneuvers at last revealing not just Jennifer, but Holly, the tray on her left shoulder piled with platters and glasses and a stack of extra napkins, the women breathing heavily as Holly unloaded, the baby flushed and sated from its time at the breast.

I turned back around as Jennifer came up with her pad and pencil poised. “We have your pie, Gavin,” she said with that lovely smile she has, so I ordered a piece—caramel apple, out of season, no less—and more coffee.

Plates and silver clattered and slid behind me. They all three chewed and slurped and swallowed. The table bucked and yawed unpredictably. The women talked about Jimmy and shopping and doctor’s visits and the transmission they couldn’t afford to fix, so I got bored and stopped listening.

I decided to let it all go. What other choice did I have? They weren’t hurting me. Jennifer returned with the pie—topped with the scoop of strawberry ice cream she knew I wanted without having to ask—and a carafe of coffee. She always took good care of me.

I picked up Berlin again—the sentences soothing, rational, the ideas big but completely understandable. There’s nothing quite like solitary reading on a cold day. 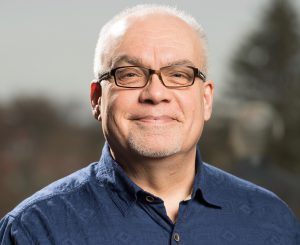 John Repp grew up near the Malaga Diner in southern New Jersey. He is the author of two collections of stories, both from March Street Press: The Old West (and Other Tales) and Heart of Joy.