Her life is a jeweled lavaliere of loses, each loss an onyx milestone: two later-term stillbirths, a dead brother from a hunting accident, there had been failed marriages, a son’s suicide by cop.

Saffron was all about sailing. If only she could’ve collected a bounty of crystal ships that drifted the high seas. Admittedly, that would have the right effect. Or maybe, if he was a giant, she could thatch him while asleep, using a matrix of Lilliputian strands. After all, it was not that long ago that he sat on her lap. Even if he thought so then, he wasn’t going anywhere.

Was there a key she could make, out of magic brass, to lock him away, if only from self-destruction? She’d done that before when he was a child, spoke firmly, said goodnight, shut the door.

She saw a television commercial once. It was humorous. It showed cowboys herding cats. David had liked that. If only he were a boy and not a dead man.

Saffron’s breasts and womb ache. It’s usually just before she is washed clean again, out into the deep of her sleep. It’s the last thing she recalls before waking at dawn. When she opens her eyes, somehow, she’s refreshed. Somehow she moves on.

Outside, the wind is swelling, bluing its face from so much puffing and bellowing. Tuberculin clouds catch themselves as gauze on winter’s jagged sycamore branches.

In her mind, she is the glue that bonds. It’s something she can’t save herself from. She is loving and giving, a real fixer-upper. If you want to walk the high-wire, without a net, she’s someone you want below. Over time, her sacrifices bloom orchids, each with a unique fragrance of disappointment and pain. If she has to, she’ll wound you, just to make you whole again. She stashes her guilt away in a hoard.

She’s sad. She isn’t very religious. Her lack of introspection takes care of that. From behind the hoarfrost on her bedroom window, she peers through the shiny glass. She skates her blood-red fingernails in figure eights, infinity lines in the ice. It’s a little like sailing, she thinks. The freedom she feels is frightening. It takes her breath away. All this is too real, this thin barrier, between her and the outside universe, this kaleidoscope world of melting colors reminiscent of her stained, church-windowed past. Yet she knows, there is nothing as opaque as forever.

Just over there, she sees the cumbersome flight of a black velvet crow, struggling against the starched wind, his black feathers covering a mending metacarpal bone. And there, she spies the neighbor’s cat on a plank of the slippery fence, two lives shy of death. Above, over the horizon, a ribbon-laced cumuli are bleached too white for such an affair. In what is a brewing cauldron of a north-eastern ice storm, she conceptualizes the extreme weather ingesting, poisonous light.

She will never again be more beautiful. Her falcon-like skull is a religion of silence. She’s vaguely aware that something out there needs saving. 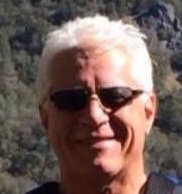 Dan A. Cardoza’s poetry, nonfiction, and fiction have met international acceptance. He has an M.S. degree in education from C.S.U.S. Most recently his work has been featured in California Quarterly, Cleaver, Coffin Bell/2019 Anthology, Dime Show Review, Entropy, Five:2: One, Gravel, New Flash Fiction Review, Spelk and Straylight Literary Magazine.