The hide is empty but for herself and Jonathan. In the clearing beyond the small, wooden structure, birds cavort—more species than she can name. Jonathan would know them all. He understood their code of feathers and colors in a way she’s never been able to grasp.

She reaches into the bag beside her and draws the thermos out. The cup that sits neatly over its lid makes her pause, flooded with a memory. At the hospice, she’d crushed strawberries against its rim, fed the crimson pulp into his mouth with a teaspoon. He’d swallowed, then muttered, soft enough that she had to lean close: “Wrong season for strawbs. Where’d you get ’em?”

And she, not wanting to recall the shop she’d bought them from, where they nestled in the fridge alongside own-brand sausage rolls, smiled back and said: “The pick-your-own. Remember?”

That small lie had seemed worth it for the sunlight she saw in his mud-brown eyes as he smiled. She popped one of the berries into her own mouth, chewing fast. It was cold against her tongue and lacked the burst of sweetness she craved, but its flavor connected her to the moment, to him.

“Tell me a secret,” she asked, and he blinked, thoughtful.

That was the last thing he said to her.

The first time they’d met at the pick-your-own, they’d been small enough that she could get lost among the raspberry canes, emerging into the field of crouch-high bushes, glistening with crimson fruit. She’d crammed them into her mouth by the handful, juice spilling from her lips, listening to the humming of bees and the distant chatter of families, until a boy stepped towards her. He eyed her red-stained hands and face, then leaned in and told her a secret.

Each summer he had a new one to tell, his breath tickling in her ear. “All strawbs used to be white,” he told her one year, “They blush because of what they saw.”

“What’d they see?” she asked, and he led her deep into the loganberry canes, dropped his shorts and stood with a serene smile on his face as she examined with intrigue the rosy heat that climbed from his groin.

Before long they, took to meeting in the woodland, lying together in the shade of a clutch of ash trees as he named the birds they could see darting. “Chaffinch, song thrush, goldfinch, blue tit, jackdaw.” The jackdaw was so lumbering compared with the others—dark and greedy beneath its cap of grey.

“He’s the smartest of the lot,” Jonathan insisted, “He’s the one that can figure out puzzles, will pick out shiny things.”

“Like what? Gems? What use are gems to a bird?” she’d asked, and he laughed.

“Reckon it catches their eye ’cause it looks like water, then they’re curious so they take it home.”

Later years had brought other discoveries, one resulting in the start of their eldest daughter and an end to their pick-your-own visits.

Thinking of that draws up a memory of the time soon after, when he leaned in close, whispered in her ear: “You’re the jewel in my eye.”

The engagement ring he gave her boasted an aquamarine, like a piece of water and two small diamonds that danced with light.

She isn’t sure whether pick-your-owns even exist these days. Perhaps, she thinks, they’ve gone the way of ploughman’s lunches and Black Forest Gateaux with artificial cream.

She was the thief—that was his first secret to her, the day he stepped out of the shadows and whispered in her ear. The strawberries she was gobbling ought to have been paid for. “If they’d weighed you on the way in, then on the way out, maybe they could do it, but for now you better go and wash yourself. Scrub the evidence away.”

“How do you know to do that?” she asked, and he grinned.

“Because I done it too.” And he lifted one red-tinged finger to his lips, making her laugh.

Now, at the hide in the woodland he’d loved, she opens the flask. It’s full of him, of his ashes, mixed liberally with nuts, seeds, and oats. She steps outside and watches the birds retreat, then layers him all over the frosted ground. Once she’s tucked back out of sight, the thrushes and wrens return. They’re fastidious, she can see that, picking out the grains they want from the dust he once was. A few bits must go with them, though. And even if one crumb of ash ends up in a gullet, he’ll get what he asked for. He’ll get to fly.

Her engagement ring glints where it fell with the ash and seeds, catching the early spring sunshine. A jackdaw hops down, eyes bright as mud, stabs out with its beak and flutters away.

She sits there a while longer, watching shadows move through the trees, whispering secrets to the wind. 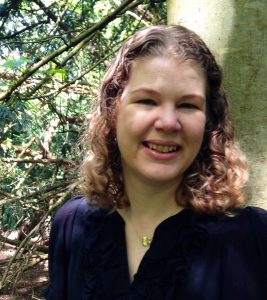 Judy Darley writes fiction, poetry and journalism. She’s been published in magazines, anthologies and in her collection Remember Me To The Bees. Find her a﻿t www.skylightrain.com﻿﻿﻿﻿